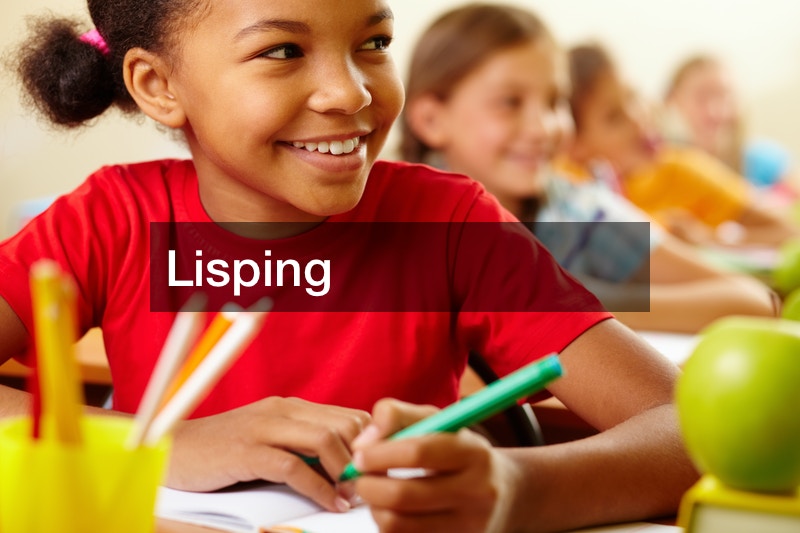 This is another common condition that is almost recognizable by anyone. Fortunately, this condition can be effectively dealt with by speech-language pathologists. In some instances, an orthodontist can also help if the condition results from teeth alignment issues. The main contribution made by SLPs when it comes to lisping is to ensure that the condition is not confused with other types of speech disorders like aphasia, apraxia, and speech impairments resulting from hearing loss.

A speech-language pathologist can also play a role in helping to distinguish between the different kinds of lisps. The majority of people will be able to pick out the most common one. This is known as the interdental/dentalised lisp. This condition is characterized by making a ‘th’ sound when the child is attempting to produce an ‘s’ sound. This type of lisps is a result of the tongue reaching past or getting into contact with the front teeth.

Because lisps are functional speech disorders, a speech-language pathologist can play a huge role in the treatment of these conditions. They can effectively correct lisps, and the ideal result is often the total elimination of the lisp. It’s important to take your child to the SLP as soon as you suspect that they may be suffering from a lisp. This is because the treatment is more effective when implemented early. However, this doesn’t mean that if you are late, the treatment is impossible. Even adults can also benefit greatly from treatment.

If your child has reached four years of age and they are still displaying symptoms of an interdental/dentalised lisp, you must take them to a speech-language pathologist as soon as possible. However, if they are displaying signs of any other type of lisp, you mustn’t wait for them to reach age four. Instead, you should take them to see an SLP as soon as you notice the first symptom. The treatment offered by pathologists involves pronunciation and annunciation coaching. The SLP can also re-teach the child how to properly sound or pronounce certain words. The child can then go back home and repeat some of the exercises in front of a mirror with sensory toys. This is why it’s crucial to include a mirror as part of the child’s bedroom set. Other forms of treatment include speech-muscle strengthening. This can be done by using methods as simple as drinking out of a straw.

Stuttering is one of the most common types of speech disorders in children. It’s so common that almost everyone knows how it presents and can easily pick it out. Stuttering can happen to anyone at least once in life. According to a survey service under the National Institute on Deafness and Other Communication Disorders, there are about three million Americans who suffer from this condition. Fortunately, almost 75% of children suffering from this condition recover and regain normal speech abilities. Please note that there is a difference between stuttering and cluttering.

The majority of people don’t understand that stuttering comes with some non-verbal symptoms. For instance, children who suffer from this condition can display non-verbal involuntary actions. This includes blinking or abdominal tensing, also known as tics. A speech-language pathologist can easily identify the symptoms of stuttering. If you notice your child displaying symptoms of stuttering, an SLP can help you make a definite diagnosis by factoring in the combination of symptoms.

Stuttering is noticeable as early as when a child starts learning to walk. However, it may also manifest later on during childhood. There are very rare cases of stuttering commencing during adulthood. However, a lot of children can carry a stutter into adulthood.

Stuttering only becomes a serious issue if it starts getting in the way of normal day-to-day activities. This condition manifests in several ways. While some children stutter all the time, some will only start stuttering when they are talking on the phone. As a result, some people can start avoiding certain activities, so they don’t trigger stuttering. When this starts happening, it will be clear that the condition is now at the level of a speech disorder.

Scientists have not been able to identify the exact cause of stuttering. However, it’s thought that there is a genetic component involved. This is because children who stutter often have family members who suffer from the condition. Other scientists believe that stammering is a form of involuntary tic. The majority of studies and research work agree that there are a lot of factors involved. Apart from that, stuttering is also thought to be linked to testosterone levels in children. Therefore, you can get some results by visiting a TRT clinic or TRT therapist.

Because this condition has no known causes, the majority of treatments are mostly behavioral. Fortunately, there are some known triggers that cause this condition. Most SLPs help individuals identify these triggers and find ways to cope with them ahead of time. 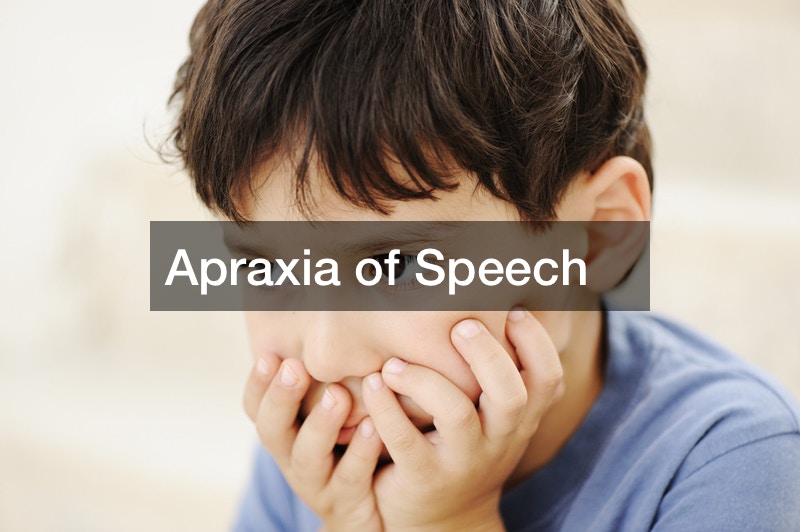 Apraxia of Speech is a condition whereby a child loses the neural pathway between their brain and speech muscles. This is one of the most common types of speech disorders in children. The child will know what they want to say, and in some instances, they may even be able to write it on paper. However, the brain will be unable to send the right messages to enable proper activation and function of the speech muscles. This happens even if the speech muscles are functioning properly.

There are varying levels of Apraxia of Speech. The most common is a stage where the child’s speech is mostly functional. You can also encounter cases where the speech is totally incoherent. The condition is caused by trauma to the brain. In adults, it can be a result of a stroke. When this happens, it’s known as acquired AOS. Unfortunately, scientists have not been able to detect brain damage in children who are born with Apraxia of Speech. As a result, it’s not clear what causes the disorder in children.

However, there are some links between this speech disorder and order conditions in closely related family members. For instance, it has been observed that children who are born with AOS have close family members who suffer from communication and learning disorders. This means there might be a genetic link.

Mild cases of AOS are usually a bit harder to detect. The diagnosis of this condition is especially complicated in children with several other speech impediments. What complicates the diagnosis even further is that mild cases of this condition shares symptoms with several other disorders. For instance, symptoms like mispronunciation of words and irregularities in tone can also be seen in other speech disorders.

As you might have guessed, severe cases of this condition are a bit easier to diagnose. Some of the most common symptoms that are encountered include the inability to articulate words, inconsistent pronunciation, groping for sound positions, and off-target movements that distort speech. 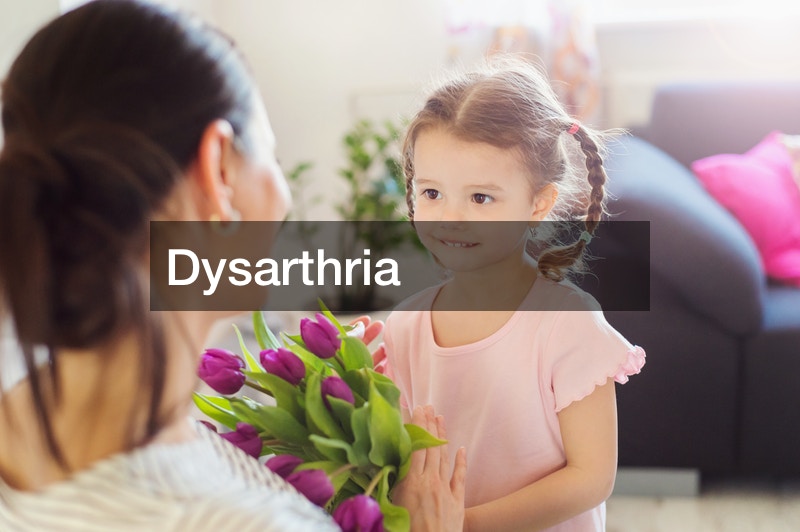 This is another one that ranks high on the list of common types of speech disorders in children. Dysarthria is a sign of nerve or muscle damage. This disorder is characterized by slowed speech and slurred speech. Children who suffer from the condition also display limited lip, tongue and jaw movement. Some will have an abnormal rhythm and pitch when they speak. Other less common symptoms include voice quality changes, difficulty articulating, and labored speech.

Because this disease is closely linked to nerve damage, it has a lot of causes. Sometimes, it can start during the development stages of the baby when they are in the womb. It can also start during birth due to conditions like cerebral palsy and muscular dystrophy. Tumors are also known to cause this condition.

SLPs can’t do much to correct muscle damage. They also won’t be able to help children with nerve damage. Therefore, most of the efforts are dedicated to dealing with dysarthria symptoms through behavior changes. For instance, an SLP can help a child to slow down when he or she is speaking. They can also provide breath training and muscle exercises to help heal muscles that contribute to speech. 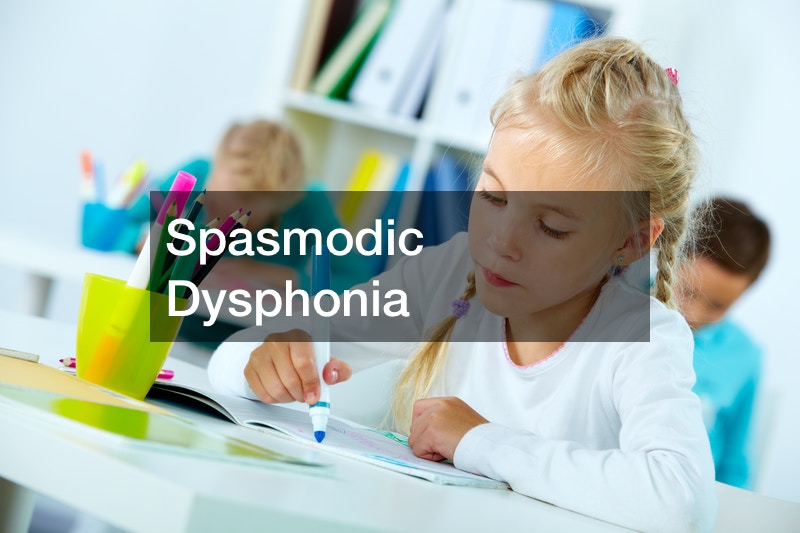 Spasmodic Dysphonia is a long-term disorder that affects a child’s voice. This condition is characterized by spasming of the vocal cords when a child is trying to speak. This results in a shaky voice that can also be described as tight, groaning, tight, or jittery. In some instances, this condition will cause the emphasis on speech to vary significantly. A lot of speech-language pathologists specialize in treating Spasmodic Dysphonia.

This condition can be caused by a variety of factors. It’s often the result of nervous system changes and muscle tone disorders. Unfortunately, it can be a bit difficult to isolate vocal cord spasms as being the cause of a shaky voice. To diagnose this condition, SLPs often team up with an ear, nose, and throat doctor. A neurologist will also be needed to make a definitive diagnosis.

Once the diagnosis has been made, an SLP will have the role of coaching the child to optimize voice production. In most instances, this type of coaching can have a tremendous effect when dealing with mild cases. SLPs usually teach patients breathing control techniques. This is done so that the child can be able to maintain a steady flow of air from the lungs.

This is a condition that’s often confused with stammering. Again, it is one of the most common types of speech disorders in children. However, there are some marked differences between these two. Cluttering usually happens in children who are smart but a bit nervous when dealing with large groups of people. In most instances, such children may be wrongfully diagnosed as having Asperger’s. There are many other similar wrong diagnoses for cluttering. This indicates how widespread this condition is and why it’s important to consult an SLP to ensure that a proper cluttering diagnosis is made.

Cluttering is a fluency disorder. This condition is characterized by rapid, jerky speech. For the condition to fall under cluttering, the child’s speech must also contain excessive amounts of words like ‘well,’ ‘um,’ ‘hmm,’ or ‘so,’ These are known as speech disfluencies. Children who display an excessive exclusion of syllables are also likely to be suffering from this condition.

The first signs of cluttering are noticed in childhood. Like the majority of fluency disorders, SLPs can deliver impressive results. They can have a marked impact on improving or doing away with cluttering altogether. It’s important to bring the condition to the attention of an LPS as soon as you notice it in your child. This is because the chances of the child recovering fully are higher when the condition is noticed early on in life. However, even adults can also benefit from treatment.

These are some of the most common speech disorders in children. It’s important to visit a speech therapy pathologist as soon as you notice signs of a speech disorder in your child. In most instances, treatment is more successful if the condition is presented early in life.

How to Make Your Home Healthier This Summer

If one of your goals this summer is to help your family become healthier, you have to start with making your home healthier. Your home is your family’s sanctuary, especially in the time of the COVID-19 pandemic when you’re staying inside more than ever before. As you spend time relaxing in your home and […]

Types of Speech Disorders in Children

How to Tell When You Need a Chiropractor Adjustment